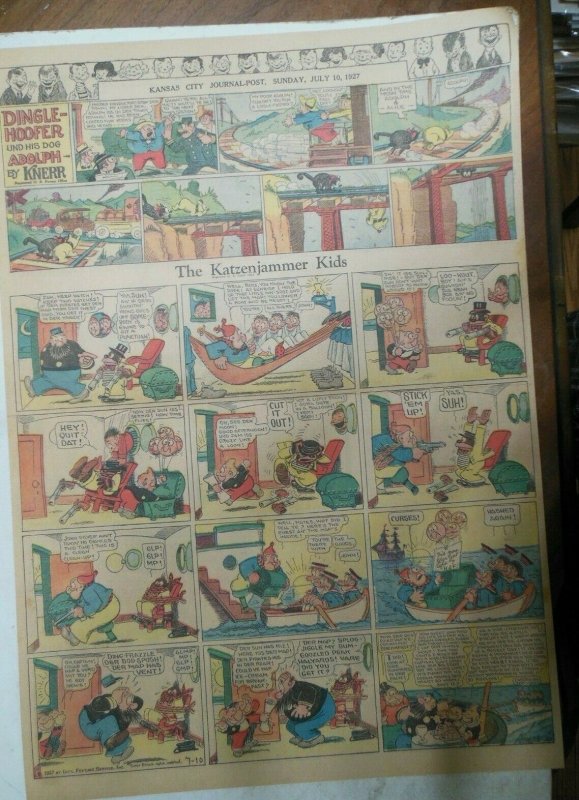 Paper: some light tanning, some slightly trimmed, many have archival reinforcement, otherwise: Very Good! This is a "_THE KATZENJAMMER KIDS"_ SUNDAY PAGE BY KNERR. This was cut from the original newspaper Sunday Comics section of 1927. SIZE: FULL SIZE: ... Read More

This is a "_THE KATZENJAMMER KIDS"_ SUNDAY PAGE BY KNERR. This was cut from the original newspaper Sunday Comics section of 1927. SIZE: FULL SIZE: 17 X 22 INCHES. PAPER: SOME LIGHT TANNING, SOME SLIGHTLY TRIMMED, MANY HAVE ARCHIVAL REINFORCEMENT, OTHERWISE: VERY GOOD! PULLED FROM BOUND VOLUMES! (PLEASE CHECK SCANS) Please include $5.00 Total postage on any size order (USA) $20.00 International FLAT RATE. I combine postage on multiple pages. Check out my other auctions for more great vintage Comic Strips and Paper Dolls. THANKS FOR LOOKING!

The Katzenjammer Kids is an American comic strip created by the German immigrant Rudolph Dirks and drawn by Harold H. Knerr for 37 years (1912 to 1949).[2] It debuted December 12, 1897 in the American Humorist, the Sunday supplement of William Randolph Hearst's New York Journal. Dirks was the first cartoonist to express dialogue in comic characters through the use ofspeech balloons.

After a series of legal battles between 1912 and 1914, Dirks left the Hearst organization and began a new strip, first titled Hans and Fritz and then The Captain and the Kids. It featured the same characters seen in The Katzenjammer Kids, which was continued by Knerr. The two separate versions of the strip competed with each other until 1979, when The Captain and the Kids ended its six-decade run. The Katzenjammer Kids is still distributed by King Features, making it the oldest comic strip still in syndication and the longest-running ever.

History
Creation and Early Years
The Katzenjammer Kids was inspired by Max and Moritz, a children's story of the 1860s by German author Wilhelm Busch. The Katzenjammer Kids (three brothers in the first strip but soon reduced to two) featured Hans and Fritz, twins who rebelled against authority, particularly in the form of their mother, Mama; der Captain, a shipwrecked sailor who acted as a surrogate father; and der Inspector, an official from the school system. Other characters included John Silver, a pirate sea captain and his crew, and King Bongo, a primitive-living but sophisticated-acting black jungle monarch who ruled a tropical island. Several of the characters spoke in stereotypical German-accented English. The main plot of the strip was Hans and Fritz would pull a prank or trick on one of the adults which resulted in their being hunted down and given a spanking in the end panel. Katzenjammer translates literally as the wailing of cats (i.e. "caterwaul") but is used to mean contrition after a failed endeavor or hangover in German (and, in the latter sense, in English too). Whereas Max & Moritz were grotesquely but comically put to death after 7 destructive pranks, the Katzenjammer Kids and the other characters still thrive.

The comic strip was turned into a stage play in 1903. It inspired several animated cartoons and was one of 20 strips included in the Comic Strip Classics series of U.S. commemorative postage stamps.

Dirks and Knerr
The Katzenjammer Kids was so popular that it became two competing comic strips and the subject of a lawsuit. This happened because Dirks wanted to take a break after 15 years, but the Hearst newspaper syndicate would not allow it. Dirks left anyway, and the strip was taken over by Harold Knerr. Dirks sued, and after a long legal battle, the Hearst papers were allowed to continue The Katzenjammer Kids, while Dirks was allowed to syndicate an almost identical strip of his own for the rival Pulitzer newspapers.

Knerr's version of the strip introduced several major new characters in the 1930s. Miss Twiddle, a pompous tutor, and her brainy niece Lena came to stay permanently with the Katzenjammers in early 1936. Later in the year Twiddle's ex-pupil, "boy prodigy" Rollo Rhubarb joined them. The ever-smug Rollo is always trying to outwit Hans and Fritz, but his cunning plans often backfire.

The Captain and the Kids also introduced some new characters. Ginga Dun is a snooty Indian trader who can outsmart almost anyone and only talks in verse. Captain Bloodshot is a pint-sized pirate rival of John Silver's.

The Captain and the Kids expanded as a daily strip during the 1930s, but it had only a short run. However, the Sunday strip remained popular for decades. From 1946, Dirks' son, John Dirks, gradually began doing more of the work on The Captain and the Kids. They introduced new characters and plots during the 1950s, including a 1958 science fiction storyline about a brilliant inventor and alien invasions. Even as John Dirks took over most of the work, Rudolph Dirks signed the strip until his death in 1968. John Dirks' drawing shifted slightly towards a more square-formed line, though it maintained the original style until The Captain and the Kids ended its run in 1979.

Knerr continued drawing The Katzenjammer Kids until his death in 1949; the strip was then written and drawn by Charles H. Winner (1949–56), with Joe Musial taking over in 1956. Musial was replaced on The Katzenjammer Kids by Mike Senisch (1976–81), Angelo DeCesare (1981–86), and Hy Eisman (1986–2006). Presently syndicated in reprint form, the strip is distributed internationally to some 50 newspapers and magazines. Notable features of the later strips included a more constructive relationship between the Captain and the boys, who sometimes had friendly conversations instead of fights. The King and his people were now Polynesian rather than African. Eisman reused a lot of old gags and stories in later years.

Between December 1916 and August 1918, a total of 37 Katzenjammer Kids silent cartoon shorts were produced by William Randolph Hearst's own cartoon studio International Film Service, which adapted well-known comic strips owned by Hearst for animation. The series was retired in 1918 at the height of the characters' popularity – partly because of the growing tension against titles with German associations after World War I. The comic strip was briefly renamed to "The Shenanigan Kids" around this time, and in 1920 another five cartoons were produced under this title. All Katzenjammer Kids/Shenanigan Kids cartoons from International Film Services were directed (and most likely also animated) by Gregory La Cava.

In 1938, The Captain and the Kids became the subject of Metro-Goldwyn-Mayer's first self-produced series of theatrical short subjectcartoons, directed by William Hanna, Bob Allen and Friz Freleng: The Captain and the Kids. Unlike the strip, which focused most of all on the gruesomely amusing antics of Hans and Fritz, the MGM cartoons often centered on the Captain. The series was overall unsuccessful, ending after one year and a total of 15 cartoons. Following that cancellation, Freleng returned to Warner Bros., where he had earlier been an animation director. The Captain was voiced by Billy Bletcher, and John Silver was voiced by Mel Blanc.

Television
The Captain and the Kids version of the strip was also animated for television as a back-up segment on Filmation's Archie's TV Funnies in 1971. In addition, the Katzenjammer Kids had appearances (along with a lot of other King Features comic strip stars) in Filmation's TV special Popeye Meets the Man Who Hated Laughter (1972).

Cultural Legacy
The Katzenjammer Kids are still very popular in the Scandinavian countries Denmark and Norway (where they are known as Knoll og Tott); in both countries, an annual comic book has been published almost every Christmas since 1911 (the only exceptions reportedly being the years 1913 and 1944). For the most part, Harold Knerr's version of the comic is used in these annual comic books. In Sweden, the annual Katzenjammer Kids comic book was also a tradition for many years, from 1928–1977.

Art Clokey, the creator of Gumby, has claimed that The Katzenjammer Kids inspired the creation of Gumby's nemeses, The Block-heads.

The Captain and the Kids has been published as an annual comic book in Norway since 1987. When no more reproducible material was available in 2001, Per Sanderhage, the editor of the Danish comic strip agency PIB, negotiated a deal where Ferd'nand cartoonist Henrik Rehr would redraw 32 pages loosely based on old magazine clippings for the annual. In spite of the artistic/ethical questions this raises regarding the testament of Dirks' original work, the arrangement continues on to this day.

In July 2009 a street in Heide, Germany (where Dirks was born) was named after the cartoonist.

French dark cabaret band Katzenjammer Kabarett is thus named in a homage to the strip, as is the Norwegian symphonic pop/swing group Katzenjammer. 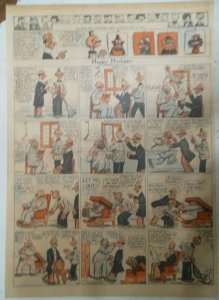 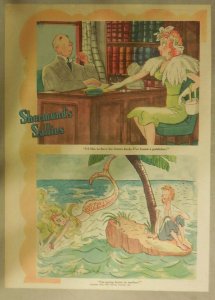 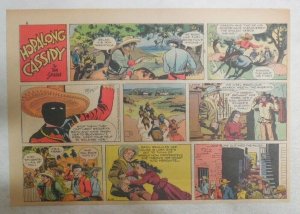 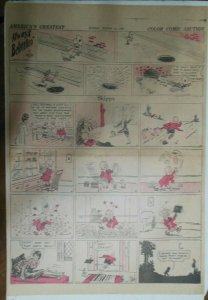