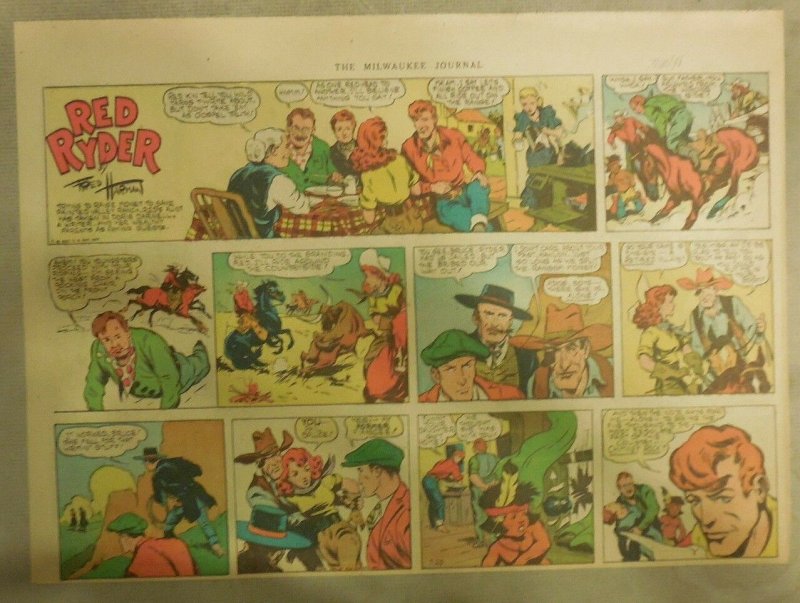 Some light tanning/wrinkles on some, a few have small archival repairs on backside, otherwise: Excellent! Please check scans. Thanks for looking! This is a _RED RYDER_ SUNDAY PAGE BY FRED HARMAN. WONDERFUL ARTWORK AND STORY TELLING ! This was cut from t ... Read More

Some light tanning/wrinkles on some, a few have small archival repairs on backside, otherwise: Excellent! Please check scans. Thanks for looking!

This is a _RED RYDER_ SUNDAY PAGE BY FRED HARMAN. WONDERFUL ARTWORK AND STORY TELLING ! This was cut from the original newspaper Sunday Comics section of 1942. SIZE: HALF FULL SIZE: 11 X 15 INCHES. PAPER: SOME LIGHT TANNING, SMALL ARCHIVAL REPAIRS ON SOME, OTHERWISE: EXCELLENT! PULLED FROM LOOSE SECTIONS! (PLEASE CHECK SCANS) Please include $5.00 Total postage on any size order (USA) $20.00 International FLAT RATE. I combine postage on multiple pages. Check out my other auctions for more great Vintage COMIC STRIPS and PAPER DOLLS. THANKS FOR LOOKING!

Red Ryder was a Western comic strip created by Stephen Slesinger and artist Fred Harman which served as the basis for a wide array of character merchandising. Syndicated by Newspaper Enterprise Association, the strip ran from Sunday, November 6, 1938, through 1965.

Red Ryder
In 1938, Harman met publisher, writer and comic syndicator Stephen Slesinger. At the time, Slesinger had scripted a new comic strip called Red Ryder and was seeking an outstanding Western artist with knowledge of the authentic period details and who had a natural gift for drawing scenes from dramatic perspectives. Harman fit the description and was a genuine cowboy who was the ideal spokesperson for the Red Ryder Character franchise.

Slesinger brought Harman to New York and worked with him for a year before Red Ryder was ready to be launched through a carefully planned rollout from comic pages, to movies and radio shows, contests, merchandising tie-ins and personal appearances by Fred Harman at charity benefits, schools, and civic and Red Ryder youth enrichment events.

Slesinger pioneered the concept of synergy between radio, films, Big Little Books, novels, serial chapters, radio programs, events, rodeos, powwows, commercial tie-ins, and licensed products such as the Daisy Red Ryder BB Gun in order to build brand equity and create lasting and consistent impressions. By the time he launched Red Ryder he had already proven his formula for creating evergreen character franchises with characters such as Tarzan, Winnie the Pooh, and many other golden age newspaper comic characters.

Red Ryder became the longest running and most popular comic character of the Western genre in movies, radio, comic strips, comic books, mass market retailing and the collectors' market. Today Red Ryder has some of the longest business relationships in the history of the licensing industry.

Characters and Story
Astride his mighty steed Thunder, Red was a tough cowpoke who lived on Painted Valley Ranch during the 1890s in the Blanco Basin of the San Juan Mountain Range, with his aunt, the Duchess, and his juvenile Native-American sidekick, Little Beaver, who rode his horse, Papoose, when they took off to deal with the bad guys. Little Beaver spoke in the pidgin English now considered an offensive caricature. (His most famous catchphrase was "You betchum, Red Ryder!") Other notable characters were Red's girlfriend Beth Wilder, arch enemy Ace Hanlon, and ranch hand Buckskin Blodgett.

Harman was eventually acclaimed as one of the finest Western pen-and-ink artists, known for his dramatic sense of perspective and authentic action. Contributing artists and writers worked in Stephen Slesinger, Inc's New York studio and contributed to Red Ryder over the years, including Jim Gary, Edmund Good, John Wade ("Johnnie") Hampton, Robert MacLeod, and Bill Lignanti (of The Palm restaurant fame), Gaylord Du Bois (wrote scripts, circa 1939-1940), and Stephen Slesinger who drew detailed story boards and scripted and approved all of the stories until his death in 1953, when Shirley Slesinger stepped into her husband's shoes, working closely with Bill Lignanti and Jay Rowland. Charlie Dye, Johnnie Hampton, Joe Beeler, and George Phippen were co-founders of the Cowboy Artists of America, of which Harman was also a charter member. When Harman left Red Ryder in 1963 to concentrate on his paintings, MacLeod continued writing the story continuity for the strip, with staff artists of Red Ryder Entp., Inc.

Gaylord Du Bois, a prolific comic book writer associated with Slesinger, scripted Red Ryder and Little Beaver for a short period in 1938 and again in the early 1940s.

Dell Comics launched its Red Ryder in August 1941, changing its title to Red Ryder Ranch Magazine with #145, and then to Red Ryder Ranch Comics with #149. Red Ryder Comics consisted of reprints of the newspaper strip until issue #47 (June 1947), when it began producing original material. Altogether, Red Ryder Comics enjoyed a first run, for a total of 151 issues, ending in 1957, one of the longest continuous newsstand runs in the U.S., for any Western comic. Over the next four decades, under license from Red Ryder, Enterprises, Inc. King Features Syndicate distributed comic reprints translated into eleven languages, while unauthorized translations have been printed in 30 languages. However, by far, the largest circulation for Red Ryder Comics are those produced in spanish and distributed throughout the spanish-speaking world. From 1954 to 1984 under an exclusive licensing agreement with Red Ryder Enterprises, Inc. Novaro distributed 474 regular editions plus extras and specials in 21 countries and territories.

Radio
The Red Ryder radio series began February 3, 1942, on the Blue Network. broadcast three times a week at 7:30pm Pacific time. When the Blue also acquired The Lone Ranger from the Mutual Broadcasting System, Mutual decided to compete by airing Red Ryder in the same time period. Thus, Red Ryder aired on the East Coast that year from May 20 to September 9 on Mutual. The series beat The Lone Ranger in the Hooper ratings, but the success was short-lived. Red Ryder was sold to a regional sponsor, Langendorf Bread, and after four months was no longer heard in the East.

Mutual and Langendorf continued the series on the West Coast Don Lee Network through the 1940s at 7:30pm on Tuesdays, Thursdays, and Saturdays, always with the familiar organ theme, "The Dying Cowboy" ("Bury Me Not on the Lone Prairie"). Announcers on the show included Ben Alexander and Art Gilmore.

Numerous actors played Little Beaver, including members of the Hopi, Jicarilla Apache, Southern Ute and Navajo Nations. One of the most notable was Robert Blake (on credits as Bobby Blake), Tommy Cook (1942 on), Frank Bresee (1942–46, alternating with Cook), Henry Blair (1944–47), Johnny McGovern (1947–50), and Sammy Ogg (1950–51). During the same mid-1940s time frame, Henry Blair also portrayed Ricky Nelson on The Adventures of Ozzie and Harriet.

Billed as "America's famous fighting cowboy," Red Ryder was notable because he did not kill his enemies but instead aimed for their gun to disarm them. Such sound effects were handled by James Dick, Monty Fraser, and Bob Turnbull.

Films and Television
Red Ryder appeared in a 1940 12-chapter serial, followed by a series of 27 movies (the last four of which were in Color). It all began in 1940 with the 12-chapter Republic movie serial The Adventures of Red Ryder, played by Don "Red" Barry, who got his nickname "Red" from the role and Tommy Cook as Red Ryder's young Indian sidekick Little Beaver. Subsequently, Wild Bill Elliott and Allan "Rocky" Lane portrayed Red Ryder in a number of films, both working with Robert Blake as Little Beaver. The last four Red Ryder movies starred Jim Bannon as Red Ryder and Don Kay ("Little Brown Jug") Reynolds as Little Beaver. All four of these movies were done in color. Both Bannon and Lane filmed pilots for a Red Ryder television series, created by Stephen Slesinger, but neither version was picked up. Both pilots survive and appear on various western DVD collections. An episode of Gunsmoke entitled "I Call Him Wonder" was produced in 1963 as a sneak peek pilot for a new Red Ryder and Little Beaver TV Show.

The Cowboy and the Prizefighter (1950)

The pilots were filmed on The Little Beaver and Red Ryder Ranches, in Colorado's Blanco Basin, near Pagosa Springs. The Little Beaver Ranch was built, by Slesinger, to resemble a Western Town. Guests stayed in cabins with facades such as The Court House, Saloon and Jail.

In order to film a cut-away Cattle Stampede, Slesinger paid local ranchers fifty cents, for each pound their stock lost, as a result of running in the stampede.

Trivia
Gunsmoke's 1963 TV Episode "I Call Him Wonder" was an authorized test for a New Red Ryder TV series that was not picked up. It features Little Beaver as Wonder, and is adapted from the original story of how Red Ryder and Little Beaver first met. Red Ryder Enterprises, Inc., retains the copyright and trademark rights to the Red Ryder characters, names, art and stories.

The outposts also included the legendary Daisy Red Ryder Carbine, which became a father-to-son Christmas gift tradition as memorialized in the 1983 Jean Shepherd film A Christmas Story. The story revolves around the author's childhood memories and a boy trying to get a "Red Ryder Carbine-Action Two-Hundred-Shot Range Model Air Rifle BB gun with a compass in the stock and a thing which tells time" for Christmas. The film was adapted from the autobiographical fiction of Jean Shepherd, by permission of Red Ryder Enterprises, Inc., which owns the Red Ryder trademarks and copyrights.

*please note: collecting and selling comics has been my hobby for over 30 years. Due to the hours of my job i can usually only mail packages out on saturdays. I send out first class or priority mail which takes 2-3 days to arrive in the usa and air mail international which takes 5 -10 days or more depending on where you live in the world. I do not "sell" postage or packaging and charge less than the actual cost of mailing. I package items securely and wrap well. Most pages come in an archival sleeve with acid free backing board at no extra charge. If you are dissatisfied with an item. Let me know and i will do my best to make it right. 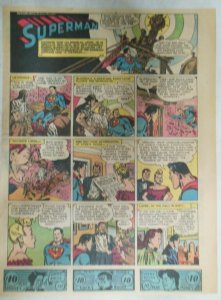 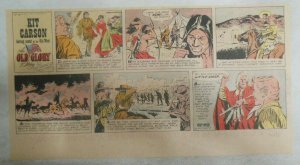 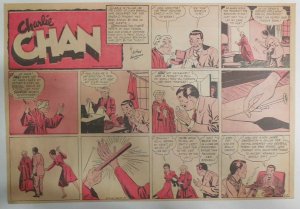 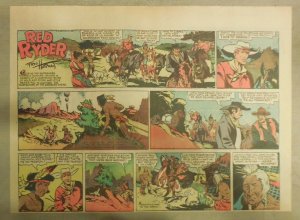