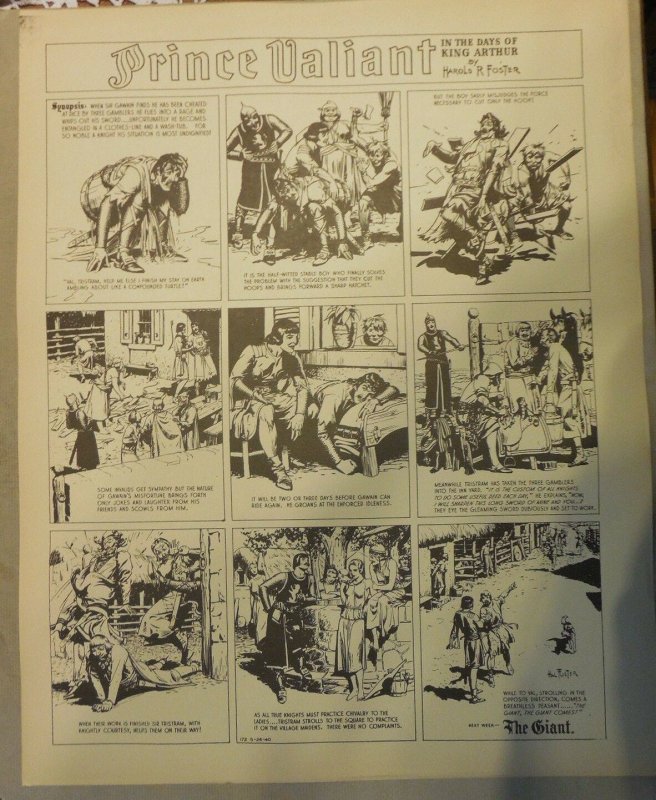 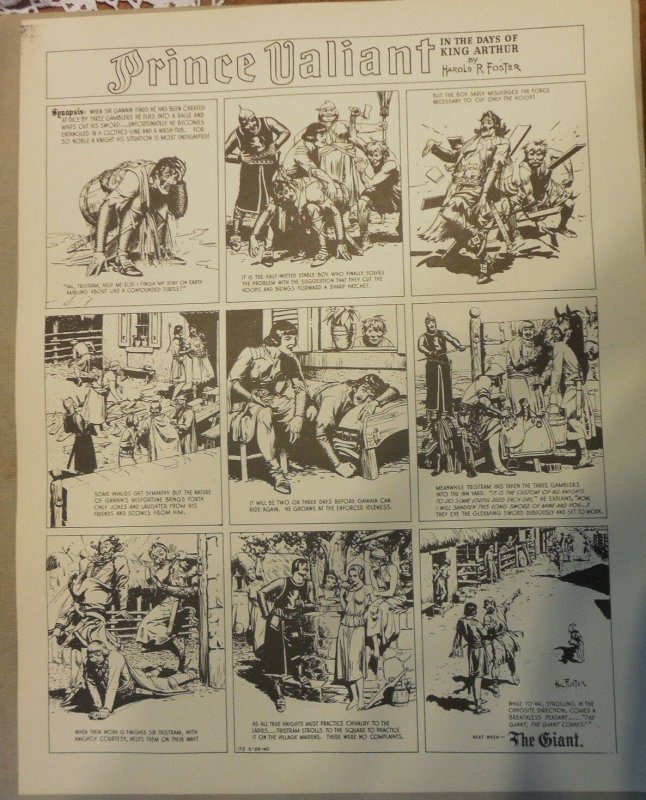 This is a Black and White Syndicate Proof. FANTASTIC ARTWORK! VERY RARE AND HARD TO FIND ! SIZE: 15 X 22 INCHES . FREE SHIPPING! (USA) $20.00 International FLAT RATE. I combine postage on multiple pages. Check out my other auctions for more great vintage Comicstrips and Paper Dolls. THANKS FOR LOOKING!

*These are Wonderful for Framing and Displaying!

Prince Valiant in the Days of King Arthur, or simply Prince Valiant, is a long-running American comic strip created by Hal Foster in 1937. It is an epic adventure that has told a continuous story during its entire history, and the full stretch of that story now totals more than 4000 Sunday strips. Currently, the strip appears weekly in more than 300 American newspapers, according to its distributor, King Features Syndicate.

Edward, the Duke of Windsor, called Prince Valiant the "greatest contribution to English literature in the past hundred years". Generally regarded by comics historians as one of the most impressive visual creations ever syndicated, the strip is noted for its realistically rendered panoramas and the intelligent, sometimes humorous, narrative. The format does not employ word balloons. Instead, the story is narrated in captions positioned at the bottom or sides of panels. Events depicted are taken from various time periods, from the late Roman Empire to the High Middle Ages, with a few brief scenes from modern times.

Prince Valiant began in full-color tabloid sections on Saturday February 13, 1937. The first full page was strip #16, which appeared in the Sunday New Orleans Times Picayune. The internal dating changed from Saturday to Sunday with strip #66 (May 15, 1938). The full-page strip continued until 1971 when strip #1788 was not offered in full-page formatâit was the last strip Foster drew. The strip continues today by other artists in a half page format.

The setting is Arthurian. Valiant (Val) is a Nordic prince from faraway Thule, located near Trondheim on the Norwegian west coast. Early in the story, Valiant arrived at Camelot, where he became friends with Sir Gawain and Sir Tristram. Earning the respect of King Arthur and Merlin, he became a Knight of the Round Table. On a Mediterranean island, he met the love of his life, Aleta, Queen of the Misty Isles, whom he later married. He fought the Huns with his powerful Singing Sword, Flamberge, a magical blade created by the same enchanter who forged Arthur's Excalibur. Val traveled to Africa and to America and helped his father regain his lost throne of Thule, usurped by the tyrant Sligon.

When the strip started in 1937, Val was five years old. The first episodes followed the youth through the wild Fens district of Britain with his father, the deposed King Aguar of Thule. When Val encountered the witch Horrit, she predicted he would have a life of adventure, noting that he would soon experience grief. Arriving home, Val discovered that his mother had died. Not long after that came his encounters with Gawain, gigantic creatures and the glory of Camelot, as detailed by Steve Donoghue:

At first, in the earliest months of Prince Valiant, Fosterâs Arthurian England might easily be confused with the Cimmeria of Conan the Barbarian: monsters abound. As a boy, Val fights a âdragonâ that looks a lot like a plesiosaur, and he fires his arrows at a rampaging swamp-turtle the size of a Zamboni. But only a few installments later, this has sublimated somewhat into history: when Val saves his new friend Sir Gawain from a robber knight and Gawain decides to take the villain to Camelot for summary judgement from King Arthur, the whole party is at one point attacked by another enormous beastâonly this time itâs a salt water crocodile!... When they all at length succeed in killing the beast, Val is outraged that Gawain would still seek to have the man tried before King Arthur. The young prince naturally speaks up in his outrage before the great king, his queen Guinevere and his feared wizard Merlinâand so a career at Camelot is born. Val becomes Gawainâs squire and almost immediately accompanies him on a quest, during which Gawain is captured and Val must use his witsâsmiling and laughing the whole timeâto free his mentor. On the trip, Gawain is seriously wounded, and the large panel where Val finally gets him back to Camelot is Fosterâs first genuine visual show-stopper in the strip.

Val acquired the Singing Sword in 1938. The original owner of the Singing Sword was Prince Arn of Ord, Valiant's rival for the maid Ilene. The two men put aside their differences when Ilene was kidnapped by Viking raiders on her way to Ord. Arn handed Valiant the charmed sword so he could hold back their pursuers while Arn rode ahead to free Ilene. The pair continued in their efforts to rescue Ilene, eventually discovering that she was killed in a shipwreck. Arn gave the Singing Sword to Valiant after that adventure, and the two parted as friends. Later in the series it was mentioned that the Singing Sword is a sister to King Arthur's Excalibur.

In 1939, he was knighted by King Arthur, and the following year, he aided in restoring his father as King of Thule. Moving across Britain, Europe, and the Holy Land, Val fought invading Goths, Huns and Saxons. In 1946, shortly after Val married Aleta, she was kidnapped by the Viking raider Ulfran. Val's pursuit took him past the Shetland Islands, the Faroe Islands, Iceland, Greenland, Newfoundland and the Saint Lawrence River, arriving at Niagara Falls 1,000 years before Columbus. Defeating Ulfran, Val was reunited with Aleta, and the couple spent that winter with friendly Native Americans.

In the strip dated August 31, 1947, Prince Arn, their first son, was born in America, and Val celebrated by getting drunk. The infant Prince Arn was named after the friend of Valâs youth, Prince Arn of Ord. Val and Aleta's other children are the twins, Karen and Valeta (born 1951), Galan (1962) and Prince Nathan (1979). Agents of the Byzantine Emperor Justinian abducted Nathan shortly after his birth, and he was eventually rescued by Arn. Earlier, Arn led an expedition to America in 1964. Val became a grandfather when Arn and his wife, Maeve, daughter of the traitorous Mordred, gave birth to Ingrid in 1987.

History and Myth
The historical and mythological elements of Prince Valiant were initially chaotic, but soon Foster attempted to bring the facts into order. Some elements of the story place it in the fifth century, such as the death of Attila the Hun in 453 and Geiseric's sacking of Rome in 455, which Prince Valiant and Aleta witness. The murder of AÃ«tius in 454 differs from the historical version; Valiant and Gawain are blamed for the murder and must flee.

From 1971 on, Murphy drew the strip from Foster scripts and pencil sketches. Foster continued to write the continuity until strip #2241 in 1980. Murphy then drew it solo with scripts by his son Cullen Murphy, an editor of The Atlantic. Stories by Cullen Murphy included many adventures in which Val is opposed by the Emperor Justinian. John Cullen Murphy's daughter, Mairead, did the lettering and coloring. In March 2004, Murphy retired and turned the strip over to his chosen successor, illustrator Gary Gianni. Scripting duties were passed on to Mark Schultz with Scott Roberts providing the coloring.

Schultz continued as the writer when Thomas Yeates began as the strip's artist on April 1, 2012. 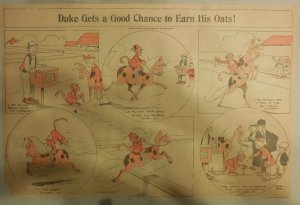 Duke The Shetland Pony Sunday by Frank Leet from 1913 Half Page Size! 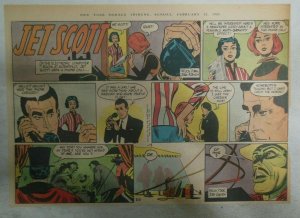 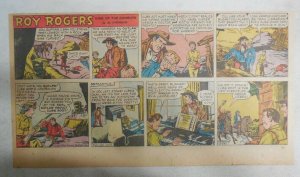 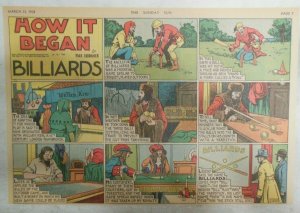