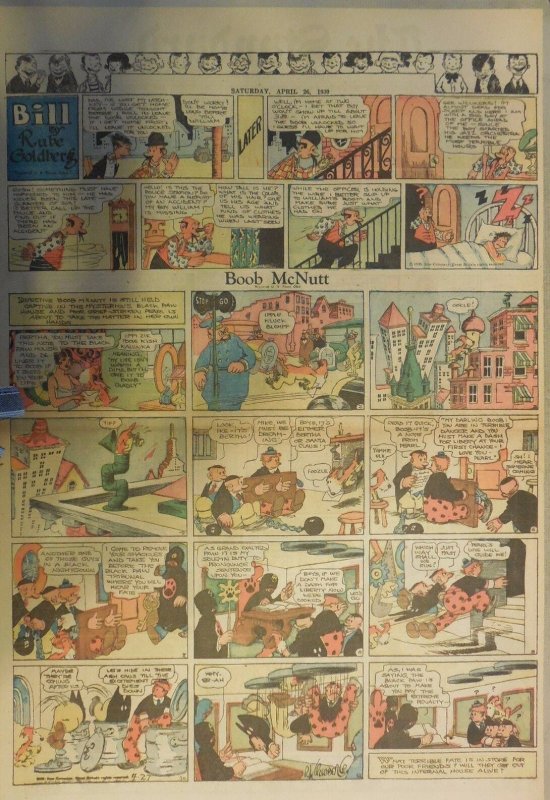 Condition:Paper: some light tanning, a few have small archival repairs on backside, some have light creases or wrinkles, some are slightly trimmed as shown, otherwise: Excellent!: Bright Colors! Please Check the Scans! This is a _BOOB MCNUTT_ SUNDAY PAGE ... Read More

UsedCondition
in_stock
Condition:Paper: some light tanning, a few have small archival repairs on backside, some have light creases or wrinkles, some are slightly trimmed as shown, otherwise: Excellent!: Bright Colors! Please Check the Scans!

Goldberg is best known for a series of popular cartoons depicting complicated gadgets that perform simple tasks in indirect, convoluted ways, giving rise to the term Rube Goldberg machines for any similar gadget or process. Goldberg received many honors in his lifetime, including a Pulitzer Prize for his political cartooning in 1948 and the Banshees' Silver Lady Award in 1959.

Goldberg was a founding member and the first president of the National Cartoonists Society, and he is the namesake of the Reuben Award, which the organization awards to the Cartoonist of the Year. He is the inspiration for various international competitions, known as Rube Goldberg Machine Contests, which challenge participants to make a complicated machine to perform a simple task.

During World War II Goldberg's sons changed their surname, at Goldberg's insistence, because of the amount of hatred towards him stemming from the political nature of his cartoons.Thomas chose the surname of George for his brother, and George, wanting to keep a sense of family cohesiveness, adopted the same surname. Thomas and George's children now run a company called RGI (Rube Goldberg Incorporated) to maintain the Goldberg name. John George (Thomas's son) is assisted by his cousin Jennifer George (George's daughter) and John's son Joshua George to keep the family name alive.

Career
Goldberg's father was a San Francisco police and fire commissioner, who encouraged the young Reuben to pursue a career in engineering. Rube graduated from the University of California, Berkeley in 1904 with a degree in Engineering and was hired by the city of San Francisco as an engineer for the Water and Sewers Department. After six months he resigned his position with the city to join the San Francisco Chronicle where he became a sports cartoonist. The following year, he took a job with the San Francisco Bulletin, where he remained until he moved to New York City in 1907, finding employment as a cartoonist with the New York Evening Mail.

The New York Evening Mail was syndicated to the first newspaper syndicate, the McClure Newspaper Syndicate, giving Goldberg's cartoons a wider distribution, and by 1915 he was earning $25,000 per year and being billed by the paper as America's most popular cartoonist. Arthur Brisbane had offered Goldberg $2,600 per year in 1911 in an unsuccessful attempt to get him to move to William Randolph Hearst's newspaper chain, and in 1915 raised the offer to $50,000 per year. Rather than lose Goldberg to Hearst, the New York Evening Mail matched the salary offer and formed the Evening Mail Syndicate to syndicate Goldberg's cartoons nationally.

Goldberg was syndicated by the McNaught Syndicate from 1922 until 1934.

A prolific artist, Goldberg produced several cartoon series simultaneously, including Mike and Ike (They Look Alike), Boob McNutt, Foolish Questions,[9][10] What Are You Kicking About,Telephonies, Lala Palooza, The Weekly Meeting of the Tuesday Women's Club, and the uncharacteristically serious soap-opera strip, Doc Wright, which ran for 10 months beginning January 29, 1933. The cartoons that brought him lasting fame involved a character named Professor Lucifer Gorgonzola Butts. In that series, Goldberg drew labeled schematics of the comical "inventions" that would later bear his name.

Cultural Legacy
The popularity of Goldberg's cartoons was such that the term "Goldbergian" was in use in print by 1915, and "Rube Goldberg" by 1928. "Rube Goldberg" appeared in the Random House Dictionary of the English Language in 1966 meaning "having a fantastically complicated improvised appearance", or "deviously complex and impractical.": The 1915 usage of "Goldbergian" was in reference to Goldberg's early comic strip Foolish Questionswhich he drew from 1909 to 1934, while later use of the terms "Goldbergian", "Rube Goldberg" and " Rube Goldberg machine" refer to the crazy inventions for which he is now best known from his strip The Inventions of Professor Lucifer Gorgonzola Butts, drawn from 1914 to 1964.

The corresponding term in the UK was, and still is, "Heath Robinson", after the English illustrator with an equal devotion to odd machinery, also portraying sequential or chain reaction elements.

Goldberg's work was commemorated posthumously in 1995 with the inclusion of Rube Goldberg's Inventions, depicting his 1931 "Self-Operating Napkin" in the Comic Strip Classics series of U.S. postage stamps.

Rube Goldberg wrote a feature film featuring his machines and sculptures called Soup to Nuts, which was released in 1930 and starred Ted Healy and the pre-Curly Howard version of The Three Stooges.

In the 1962 John Wayne movie Hatari!, an invention to catch monkeys by character Pockets, played by Red Buttons, is described as a "Rube Goldberg."

In the late 1960s and early 70s, educational shows like Sesame Street, Vision On and The Electric Company routinely showed bits that involved Rube Goldberg devices, including the Rube Goldberg Alphabet Contraption, and the What Happens Next Machine.

Also in the Final Destination film series the characters often die in Rube Goldberg-esque ways. In the film The Great Mouse Detective, the villain Ratigan attempts to kill the film's heroes, Basil of Baker Street and David Q. Dawson, with a Rube Goldberg style device. The classic video in this genre was done by the artist duo Peter Fischli & David Weiss in 1987 with their 30-minute video "Der Lauf der Dinge" or "The Way Things Go".

Honda produced a video in 2003 called "The Cog" using many of the same principles that Fischli and Weiss had done in 1987.

In 2005, the American alternative rock/indie band The Bravery released a video for their debut single, "An Honest Mistake," which features the band performing the song in the middle of a Rube Goldberg machine.

In 1999, an episode of The X-Files was titled "The Goldberg Variation". The episode intertwined characters FBI agents Mulder and Scully, a simple apartment super, Henry Weems (Willie Garson) and an ailing young boy, Ritchie Lupone (Shia LaBeouf) in a real-life Goldberg device.

The 2010 music video "This Too Shall Pass – RGM Version" by the rock band OK Go features a machine that, after four minutes of kinetic activity, shoots the band members in the face with paint. "RGM" presumably stands for Rube Goldberg Machine.

2012 The CBS show Elementary features a machine in its opening sequence.

2014 The Web Series, "Deadbeat," on Hulu features an episode titled, "The Ghost in the Machine," which features the protagonist, Kevin, helping the ghost of Rube Goldberg complete a contraption that will bring his grandchildren together after making a collection of random items into a machine that ends up systematically injuring two of his grandchildren so they end up in the same hospital and finally meet.

Games
Both board games and video games have been inspired by Goldberg's creations, such as the 60's era board game Mouse Trap, the 1990s-era series of The Incredible Machine games, and Crazy Machines.[citation needed] The Humongous Entertainment game Freddi Fish 2: The Case of the Haunted Schoolhouse involves searching for the missing pieces to a Rube Goldberg machine to complete the game.

In 1909 Goldberg invented the "Foolish Questions" game based on his successful cartoon by the same name. The game was published in many versions from 1909 to 1934.

Rube Works: The Official Rube Goldberg Invention Game, the first game authorized by The Heirs of Rube Goldberg, was published by Unity Games (the publishing arm of Unity Technologies) in November 2013.

*please note: collecting and selling comics has been my hobby for over 30 years. _due to the hours of my job __i can usually only mail packages out on saturdays_. I send out first class or priority mail which takes 2 - 10 days to arrive in the usa and air mail international which takes 7 - 30 days or more depending on where you live in the world. I do not "sell" postage or packaging and charge less than the actual cost of mailing. I package items securely and wrap well. Most pages come in an archival sleeve with acid free backing board at no extra charge. If you are dissatisfied with an item. Let me know and i will do my best to make it right. 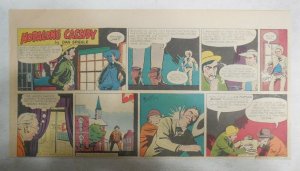 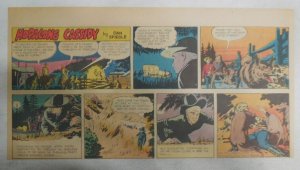 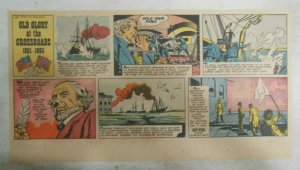 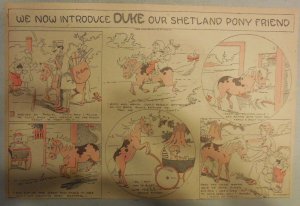 Duke The Shetland Pony Sunday #1 by Frank Leet from 1913 Half Page Size!