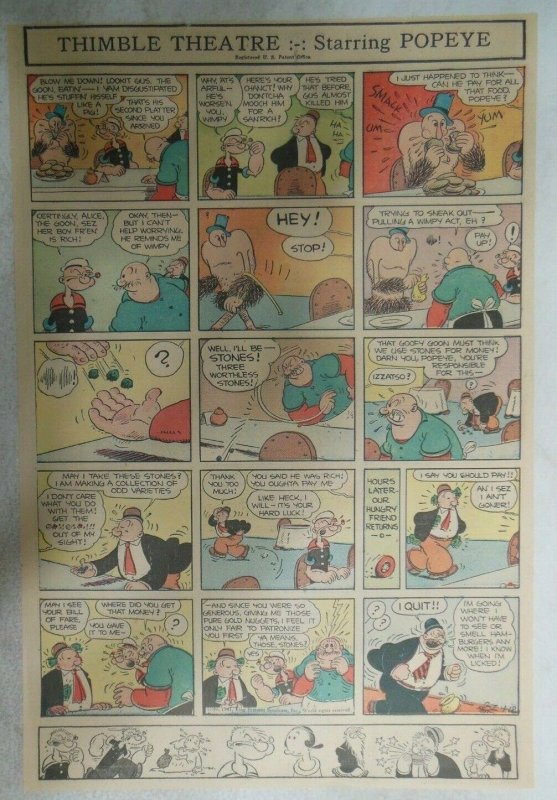 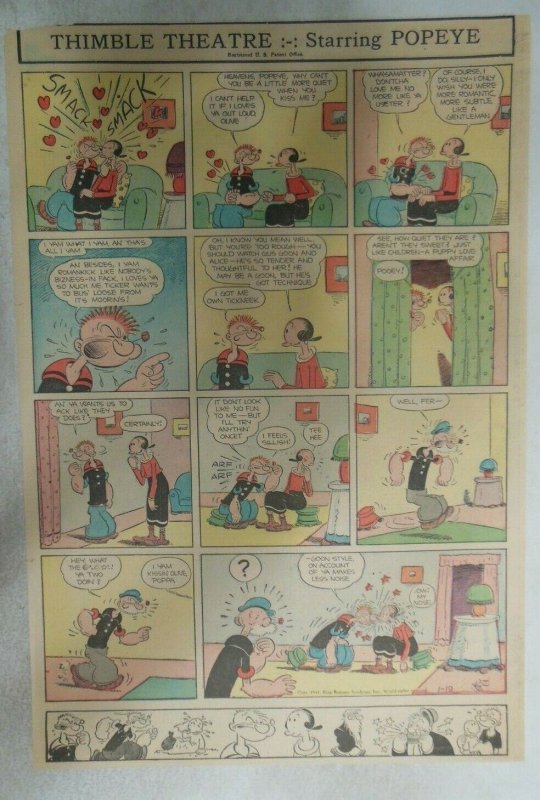 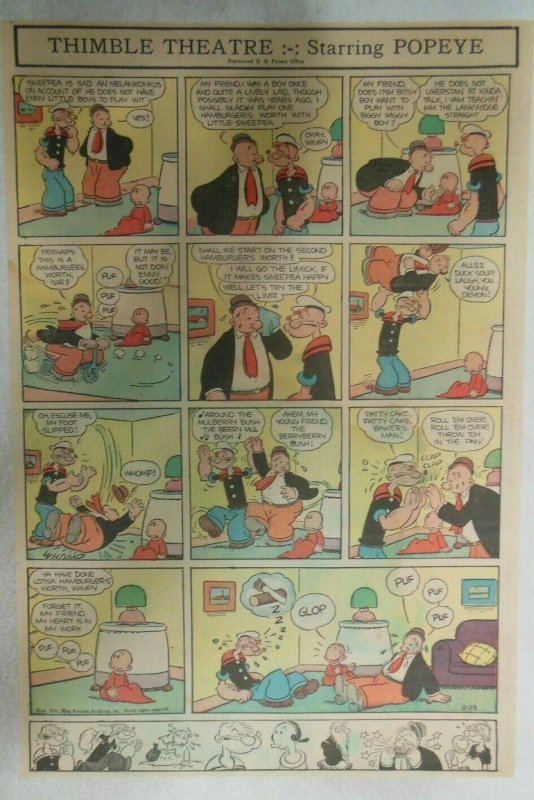 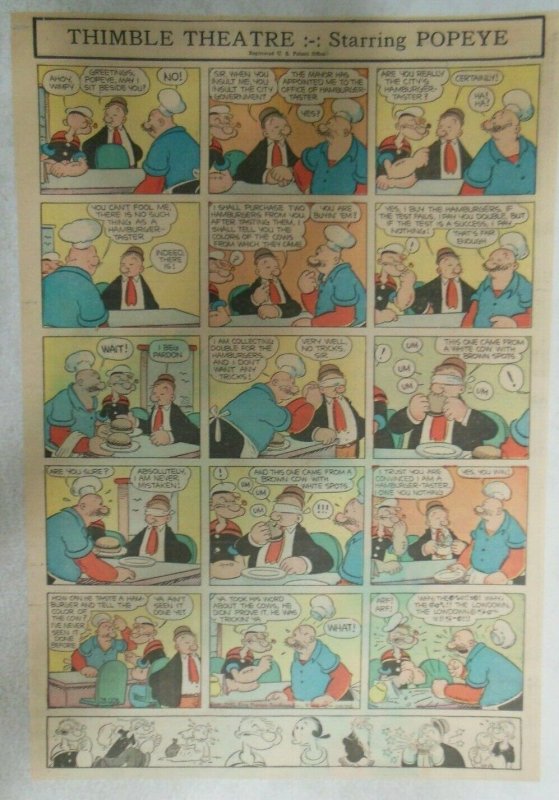 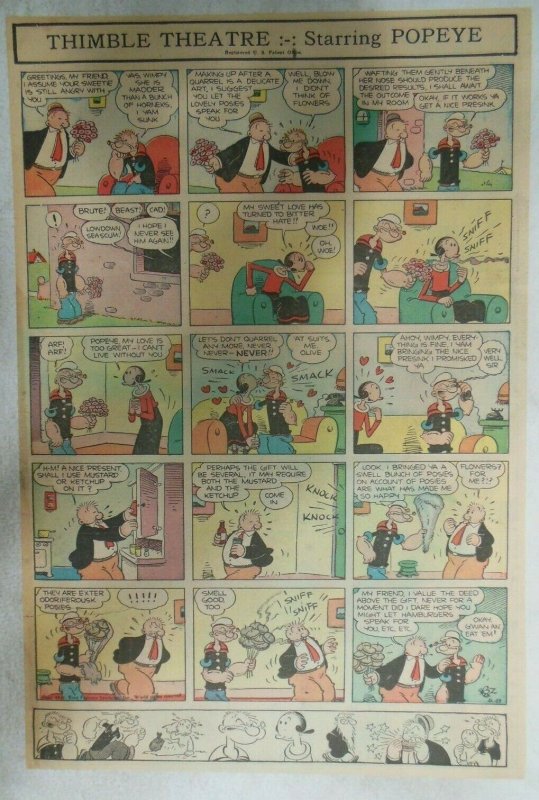 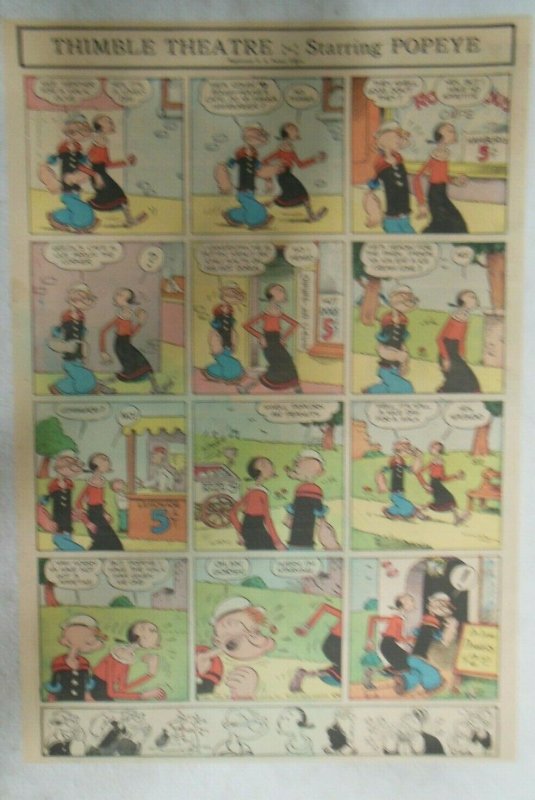 Condition:Paper: some light tanning, some slightly trimmed, many have archival reinforcement, otherwise: Very Good! This is a lot of 37 _"THIMBLE THEATRE/POPEYE"_ SUNDAY PAGES BY TOM SIMS AND BILL ZABOLEY. These were cut from the original newspaper Sunda ... Read More

Segar's Thimble Theatre strip was in its 10th year when Popeye made his debut, but the one-eyed sailor quickly became the main focus of the strip, and Thimble Theatre became one of King Features' most popular properties during the 1930s. After Segar died in 1938, Thimble Theatre was continued by several writers and artists, most notably Segar's assistant Bud Sagendorf. The strip continues to appear in first-run installments in its Sunday edition, written and drawn by Hy Eisman. The daily strips are reprints of old Sagendorf stories.[32]

In 1933, Max Fleischer adapted the Thimble Theatre characters into a series of Popeye the Sailor theatrical cartoon shorts for Paramount Pictures.These cartoons proved to be among the most popular of the 1930s, and Fleischer—and later Paramount's own Famous Studios—continued production through 1957. These cartoon shorts are now owned by Turner Entertainment and distributed by its sister company Warner Bros.

Over the years, Popeye has also appeared in comic books, television cartoons, video games, hundreds of advertisements, peripheral products ranging from spinach to candy cigarettes, and the 1980 live-action film directed by Robert Altman and starring Robin Williams as Popeye.

Charles M. Schulz said, "I think Popeye was a perfect comic strip, consistent in drawing and humor". In 2002, TV Guide ranked Popeye number 20 on its "50 Greatest Cartoon Characters of All Time" list.

Fictional Character and Story
Popeye's story and characterization vary depending on the medium. Originally, Popeye got "luck" from rubbing the head of the Whiffle Hen; by 1932, he was instead getting "strength" from eating spinach. Swee'Pea is Popeye's ward in the comic strips, but he is often depicted as belonging to Olive Oyl in cartoons.

There is no absolute sense of continuity in the stories, although certain plot and presentation elements remain mostly constant, including purposeful contradictions in Popeye's capabilities. Popeye seems bereft of manners and uneducated, yet he often comes up with solutions to problems that seem insurmountable to the police or the scientific community. He has displayed Sherlock Holmes-like investigative prowess, scientific ingenuity, and successful diplomatic arguments. In the animated cartoons his pipe also proves to be highly versatile. Among other things, it has served as a cutting torch, jet engine, propeller, periscope, musical instrument, and a whistle with which he produces his trademark toot. He also eats spinach through his pipe, sometimes sucking in the can along with the contents. Since the 1970s, Popeye is seldom depicted using his pipe to smoke tobacco.

Popeye's exploits are also enhanced by a few recurring plot elements. One is the love triangle among Popeye, Olive, and Bluto, and Bluto's endless machinations to claim Olive at Popeye's expense. Another is his near-saintly perseverance in overcoming any obstacle to please Olive, who often (if temporarily) renounces Popeye for Bluto.

Thimble Theatre and Popeye Comic Strips
Thimble Theatre was cartoonist Segar's third published strip when it first appeared in the New York Journal on December 19, 1919. The paper's owner, William Randolph Hearst, also owned King Features Syndicate, which syndicated the strip. Thimble Theatre was intended as a replacement for Midget Movies by Ed Wheelan (Wheelan having recently resigned from King Features). It did not attract a large audience at first, and at the end of its first decade appeared in only half a dozen newspapers.

In its early years, the strip featured characters acting out various stories and scenarios in theatrical style (hence the strip's name). It could be classified as a gag-a-day comic in those days.

Thimble Theatre's first main characters were the thin Olive Oyl and her boyfriend Harold Hamgravy. After the strip moved away from its initial focus, it settled into a comedy-adventure style featuring Olive, Hamgravy, and Olive's enterprising brother Castor Oyl. Olive's parents Cole and Nana Oyl also made frequent appearances.

Popeye first appeared in the strip on January 17, 1929, as a minor character. He was initially hired by Castor Oyl and Ham to crew a ship for a voyage to Dice Island, the location of a casino owned by the crooked gambler Fadewell. Castor intended to break the bank at the casino using the unbeatable good luck conferred by stroking the hairs on the head of Bernice the Whiffle Hen. Weeks later, on the trip back, Popeye was shot many times by Jack Snork, a stooge of Fadewell's, but survived by rubbing Bernice's head. After the adventure, Popeye left the strip, but, owing to reader reaction, he was quickly brought back.

The Popeye character became so popular that he was given a larger role, and the strip was taken up by many more newspapers as a result. Initial strips presented Olive as being less than impressed with Popeye, but she eventually left Hamgravy to become Popeye's girlfriend and Hamgravy left the strip as a regular. Over the years, however, she has often displayed a fickle attitude towards the sailor. Castor Oyl continued to come up with get-rich-quick schemes and enlisted Popeye in his misadventures. Eventually, he settled down as a detective and later on bought a ranch out west. Castor has seldom appeared in recent years.[citation needed]

In 1933, Popeye received a foundling baby in the mail whom he adopted and named Swee'Pea. Other regular characters in the strip were J. Wellington Wimpy, a hamburger-loving moocher who would "gladly pay you Tuesday for a hamburger today" (he was also soft-spoken and cowardly; Vickers Wellington bombers were nicknamed "Wimpys" after the character); George W. Geezil, a local cobbler who spoke in a heavily affected accent and habitually attempted to murder or wish death upon Wimpy; and Eugene the Jeep, a yellow, vaguely doglike animal from Africa with magical powers. In addition, the strip featured the Sea Hag, a terrible pirate, as well as the last witch on Earth—her even more terrible sister excepted; Alice the Goon, a monstrous creature who entered the strip as the Sea Hag's henchwoman and continued as Swee'Pea's babysitter; and Toar, a caveman.

Segar's strip was quite different from the cartoons that followed. The stories were more complex, with many characters that never appeared in the cartoons (King Blozo, for example). Spinach usage was rare and Bluto made only one appearance. Segar signed some of his early Popeye comic strips with a cigar, his last name being a homophone of "cigar" (pronounced SEE-gar). Comics historian Brian Walker stated: "Segar offered up a masterful blend of comedy, fantasy, satire and suspense in Thimble Theater Starring Popeye".

Thimble Theatre became one of King Features' most popular strips during the 1930s. A poll of adult comic strip readers in the April 1937 issue of Fortune magazine voted Popeye their second-favorite comic strip (after Little Orphan Annie). By 1938, Thimble Theatre was running in 500 newspapers, and over 600 licensed "Popeye" products were on sale.[33] The success of the strip meant Segar was earning $100,000 a year at the time of his death. Following an eventual name change to Popeye in the 1970s, the comic remains one of the longest-running strips in syndication today. After Mussolini came to power in Italy, he banned all American comic strips, but Popeye was so popular the Italians made him bring it back.[citation needed] The strip continued after Segar's death in 1938; a series of artists performed the work. In the 1950s, a spinoff strip, Popeye the Sailorman, was established.

Artists After Segar
After Segar's death in 1938, many different artists were hired to draw the strip. Tom Sims, the son of a Coosa River channel-boat captain, continued writing Thimble Theatre strips and established the Popeye the Sailorman spin-off. Doc Winner and Bela Zaboly,[42] successively, handled the artwork during Sims's run. Eventually, Ralph Stein stepped in to write the strip until the series was taken over by Bud Sagendorf in 1959.

Sagendorf wrote and drew the daily strip until 1986, and continued to write and draw the Sunday strip until his death in 1994. Sagendorf, who had been Segar's assistant, made a definite effort to retain much of Segar's classic style, although his art is instantly discernible. Sagendorf continued to use many obscure characters from the Segar years, especially O. G. Wotasnozzle and King Blozo. Sagendorf's new characters, such as the Thung, also had a very Segar-like quality. What set Sagendorf apart from Segar more than anything else was his sense of pacing. Where plotlines moved very quickly with Segar, it sometimes took an entire week of Sagendorf's daily strips for the plot to be advanced even a small amount.

From 1986 to 1992, the daily strip was written and drawn by Bobby London, who, after some controversy, was fired from the strip for a story that could be taken to satirize abortion.[44] London's strips put Popeye and his friends in updated situations, but kept the spirit of Segar's original. One classic storyline, titled "The Return of Bluto", showed the sailor battling every version of the bearded bully from the comic strip, comic books, and animated films. The Sunday edition of the comic strip is currently drawn by Hy Eisman, who took over in 1994. The daily strip began featuring reruns of Sagendorf's strips after London was fired and continues to do so today.

On January 1, 2009, 70 years since the death of his creator, Segar's character of Popeye (though not the various films, TV shows, theme music and other media based on him) became public domain in most countries, but remains under copyright in the US. Because Segar was an employee of King Features Syndicate when he created the Popeye character for the company's Thimble Theatre strip, Popeye is treated as a work for hire under US copyright law. Works for hire are protected for 95 years from publication or 120 years from creation, whichever is shorter. Since Popeye made his first appearance in January 1929, and all US copyrights expire on December 31 of the year that the term ends, Popeye will enter the public domain in the US on January 1, 2025, assuming no amendments to US copyright law before that date.

*please note: collecting and selling comics has been my hobby for over 30 years. _due to the hours of my job i can usually only mail packages out on saturdays. _i send out priority mail which takes 2 - 7 days to arrive in the usa and air mail international which takes 5 - 30 daysor more! Depending on where you live in the world. I do not "sell" postage or packaging and charge less than the actual cost of mailing. I package items securely and wrap well. Most pages come in an archival sleeve with acid free backing board at no extra charge. If you are dissatisfied with an item. Let me know and i will do my best to make it right. 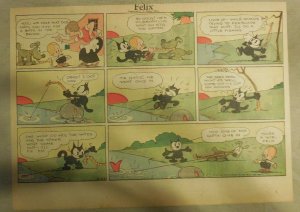 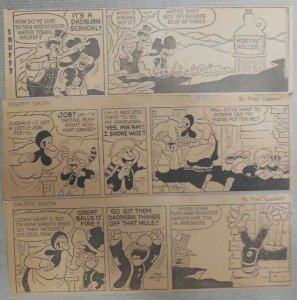 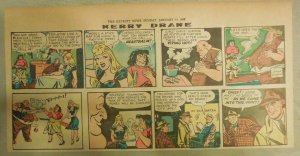 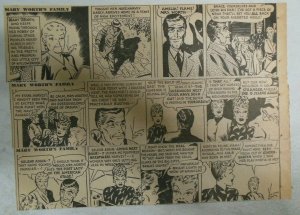