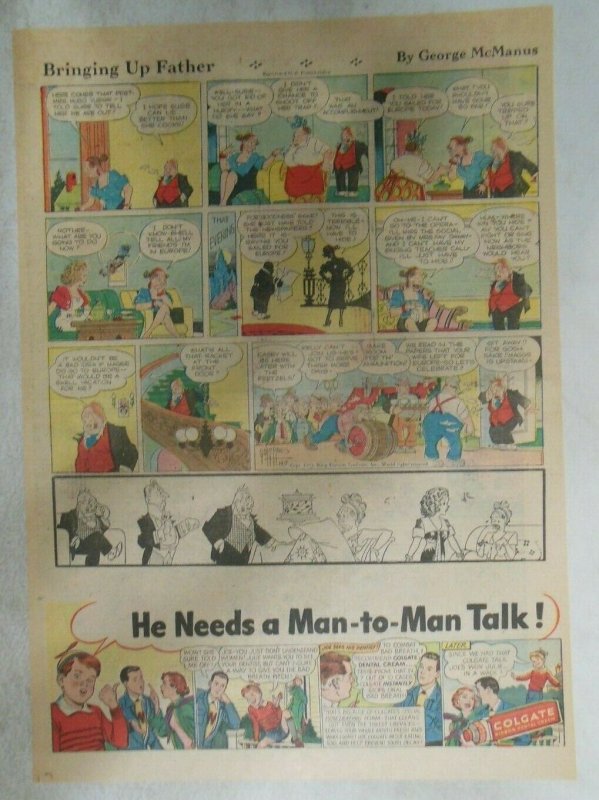 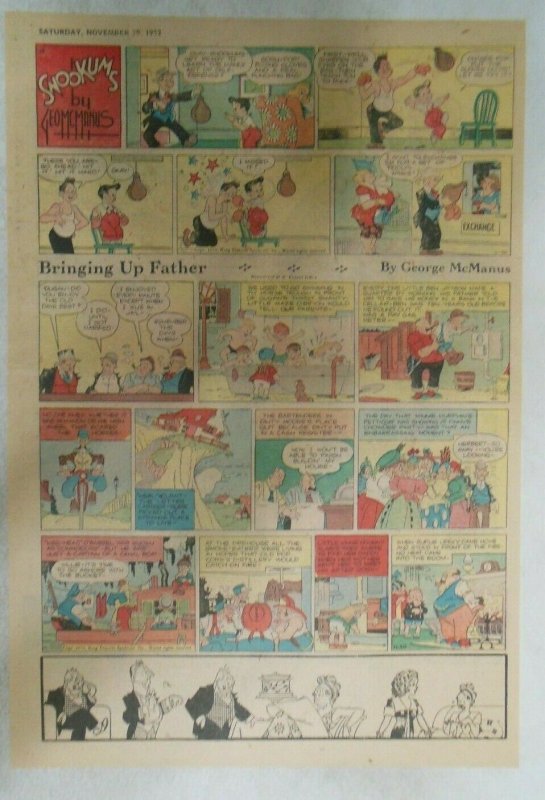 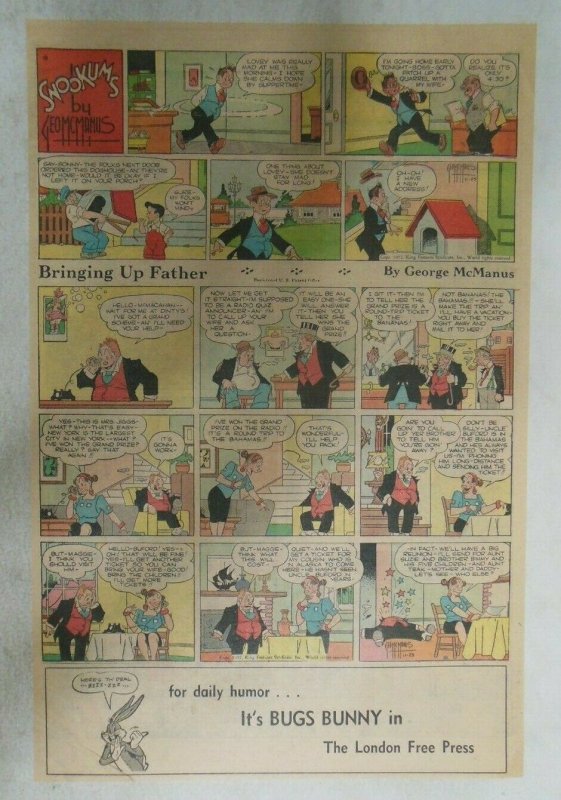 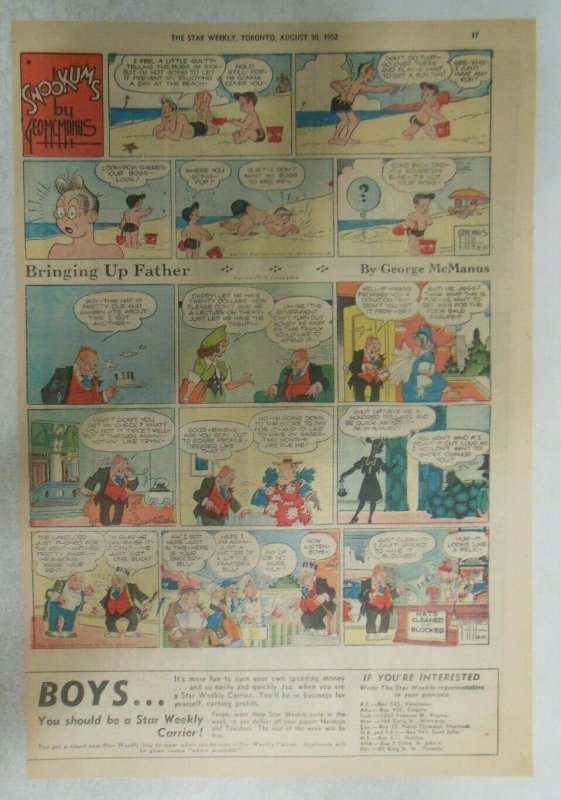 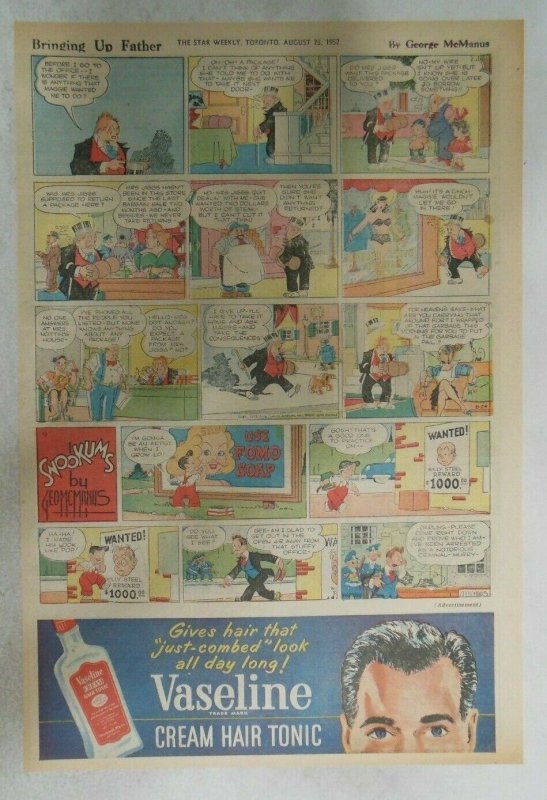 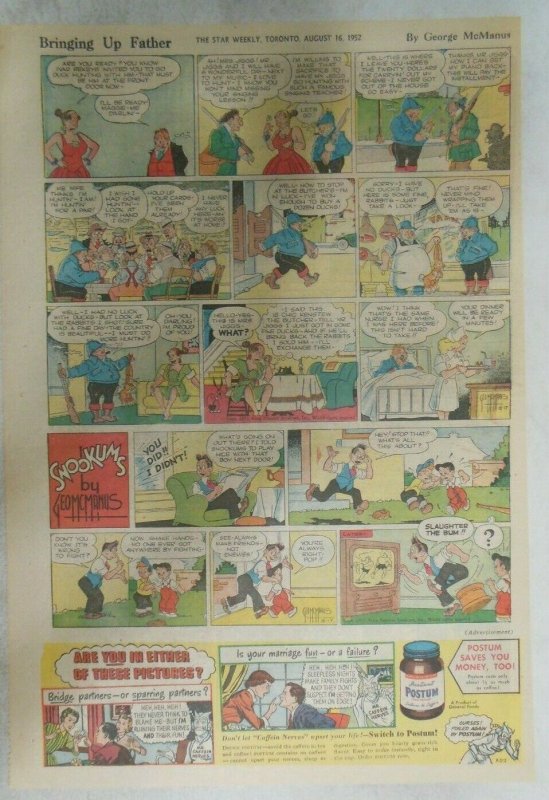 (20) Bringing Up Father Sundays by George McManus from 1952 Size: Tabloids

Paper: some light tanning, a few have small archival repairs on backside, some have light creases or wrinkles, some are slightly trimmed as shown, otherwise: Excellent!: Bright Colors! Please Check the Scans! This is a lot of 20 _BRINGING UP FATHER_ SUND ... Read More

Paper: some light tanning, a few have small archival repairs on backside, some have light creases or wrinkles, some are slightly trimmed as shown, otherwise: Excellent!: Bright Colors! Please Check the Scans!

George Mcmanus
George McManus (January 23, 1884 – October 22, 1954) was an American cartoonist best known as the creator of Irish immigrant Jiggs and his wife Maggie, the main characters of his syndicated comic strip, Bringing Up Father.

Biography
Born in St. Louis, Missouri of Irish parents, McManus had an innate gift for drawing and a sense of humor. He recalled an incident when he was in high school: "My teacher sent home to my parents a picture I had drawn of a classmate named Sweeney. 'This is what your boy has been doing,' the teacher wrote, icily. I laid the note in Pop's lap and headed wearily for the woodshed. But Pop, instead, put on his hat and coat and went to the editor of The Republican. He showed [my drawing of] Sweeney to the editor. Next day I had a job on The Republican at $5 a week—as an errand boy."

At The Republican, he created his first comic strip, Alma and Oliver. In 1904, after winning $3000 at the racetrack, he went to New York City and a job with the prestigious New York World, where he worked on several short-lived comic strips, including Snoozer, The Merry Marcelene, Ready Money Ladies, Cheerful Charlie, Nibsby the Newsboy in Funny Fairyland, Panhandle Pete and Let George Do It.[2][3]

Comic Strip Evolution
In 1904, McManus created the first American family comic strip, The Newlyweds, about an elegant young couple and their baby Snookums. The popularity of the strip prompted the management of The New York American to invite McManus to work for their newspaper, which he did from 1912 on. Renaming The Newlyweds as Their Only Child, he continued that strip and began other daily strips: Rosie's Beau, Love Affairs of a Mutton Head, Spareribs And Gravy and Bringing Up Father.

Syndicated internationally by King Features Syndicate, Bringing Up Father achieved great success and was produced by McManus from 1913 until his death, when Vernon Greene and Frank Fletcher replaced him. McManus was inspired by The Rising Generation, a musical comedy by William Gill that he had seen as a boy in St. Louis, Missouri's Grand Opera House, where his father was manager. In The Rising Generation, Irish-American bricklayer Martin McShayne (played by the fat Irish comedian Billy Barry in the stage production McManus saw) becomes a wealthy contractor, yet his society-minded wife and daughter were ashamed of him and his buddies, prompting McShayne to sneak out to join his pals for poker. McManus knew Barry and used him as the basis for his drawings of Jiggs. Two years before his death, McManus said that Bringing Up Father had earned him $12,000,000 during his lifetime.

Awards
For his contribution to American humor, Roanoke College honored McManus with an honorary degree, Doctor of Humane Letters.

Later Life
During the 1940s, McManus lived at 8905 Sunset Boulevard in Hollywood. He died in 1954 in Santa Monica, California and was interred in the Woodlawn Cemetery in The Bronx, New York City.

Cultural Legacy
Jiggs serves as insignia of the U.S. Air Force's 11th Bomb Squadron, with whom McManus served during World War I. In 1995, the comic strip was one of 20 included in the "Comic Strip Classics" series of commemorative United States postage stamps.

*please note: collecting and selling comics has been my hobby for over 30 years. Due to the hours of my job i can usually only mail packages out on saturdays. I send out first class or priority mail which takes 2 - 7 days to arrive in the usa and air mail international which takes 5 - 30 days or more depending on where you live in the world. I do not "sell" postage or packaging and charge less than the actual cost of mailing. I package items securely and wrap well. Most pages come in an archival sleeve with acid free backing board at no extra charge. If you are dissatisfied with an item. Let me know and i will do my best to make it right. 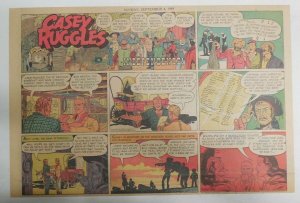 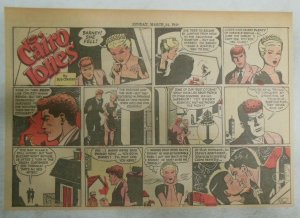 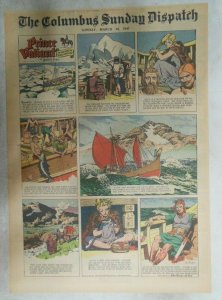 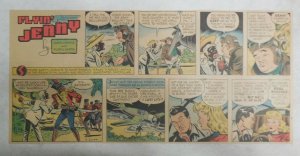